A Great Visit to Palazzo Davanzati

This year my house was full of guests for the holidays, something I really enjoy. So, besides all the Christmas feasting that symbolizes the Italian tradition, I wanted to show my visitors the beauty of being in (and close to ) during this special time of the year. The weather certainly didn’t cooperate much, as we had rain and fog for the better part of the period, but I did my best to counteract Mother Nature all the same. 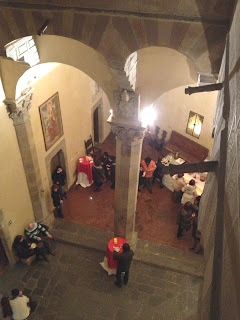 One of the best choices was to attend Aperitivo ad Arte at the Palazzo Davanzati. It had been years since I had been to this museum, so I was looking forward to it as much as everyone else. This wonderful event is a great opportunity for locals, as well as tourists, to discover one of the city's lovely museums in a unique and captivating setting. In fact, I noticed that many Florentines present that evening became increasingly excited as they realized how beautiful this historic palazzo was. Many commented on the fact that they had never been there before, acknowledging that they had really missed something special. These observations made me reflect on how many of us live in cities that we only know in part. 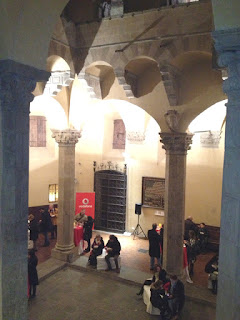 In the major art cities of the world, monuments and museums are almost always flooded with tourists, making them unpopular with locals who prefer not to brave the lines or deal with the crowds. Thus, residents often overlook so many things which are literally sitting right under their noses.

This is a major reason why initiatives like this one, held in the off season, are particularly useful. It is a chance for Florentines to enjoy their city and become acquainted with some of its most beautiful venues.

Palazzo Davanzati was originally built for the Davizzi family, wealthy merchants and bankers, in the mid 14th century. In 1578 it was purchased by the Davanzati family, who retained possession until 1838 when it was divided into several apartments and subsequently suffered extensive damage. 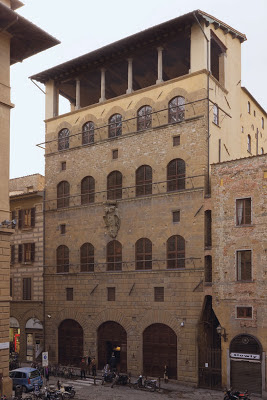 In 1904 the building was bought by Elia Volpi, an antiques dealer who restored and furnished it to create a private museum, The Old Florentine House, in 1910. Future events and misfortune eventually led to the demise of the museum and its belongings until the State took it over in 1951 and reopened it to the public five years later. However, in 1995 the museum was closed for major restoration until 2005 and only this year (2012) was it fully reopened.

The building is a rare architectural example of the transition from the medieval tower house to the Renaissance palace. In fact, the Davanzati family united several tower houses to achieve their grand palazzo. The façade originally had an open three-arched loggia on the ground floor that was used as a shop. Today it is closed and on the top floor there is an open loggia (with a great view of the city) which was added in the 16th century. 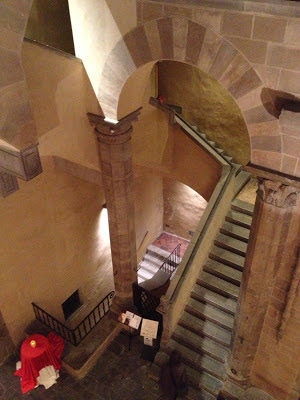 Upon entering the building you are transported back in time. The impressive courtyard has an irregular shape marked by arches, octagonal pillars with decorated capitals and a majestic stone staircase leading to the living quarters on the three upper floors. Throughout the visit you will feel as if you are really inside a historic residence where time has stood still. The elegant reception rooms and spacious bedrooms are decorated with fine antiques, paintings, sculptures, tapestries and pottery. A large kitchen, located on the top floor, boasts a series of utensils and antique household appliances. The original architectural elements like hand painted wood ceilings and wall decorations, and the unique feature of having bathrooms on every floor, an uncommon luxury in a home from this period, underscore the elite origins of this beautiful palazzo. 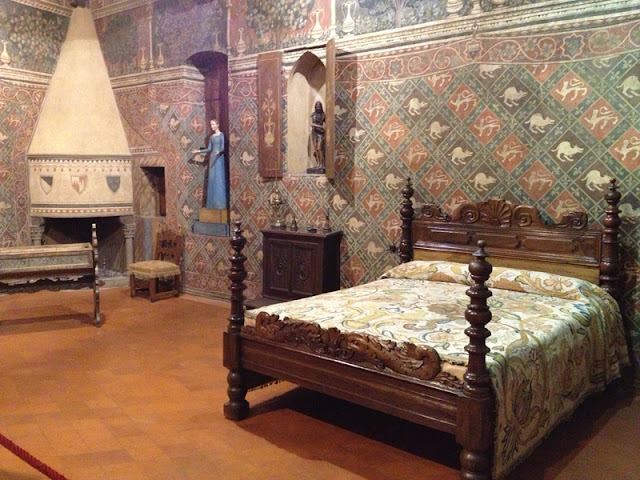 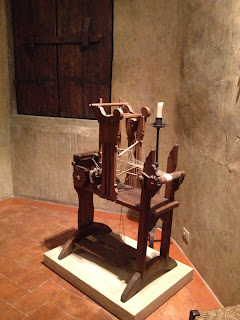 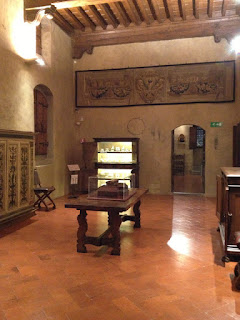 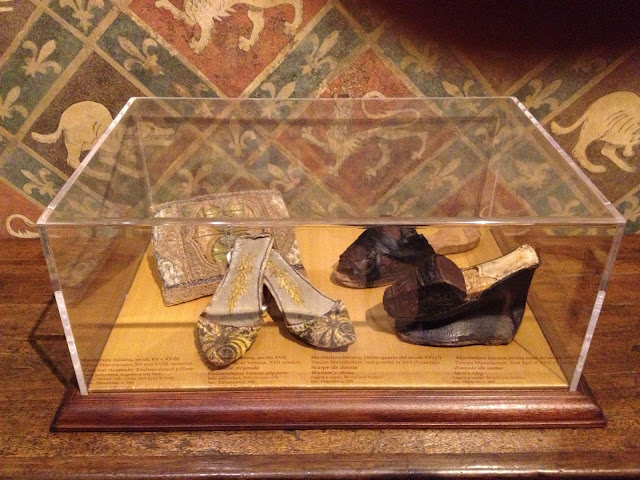 Another thing not to be missed is the stunning collection of fine lace and embroidery representing the most exquisite samples of European manufacture between the 17th and 20th centuries. 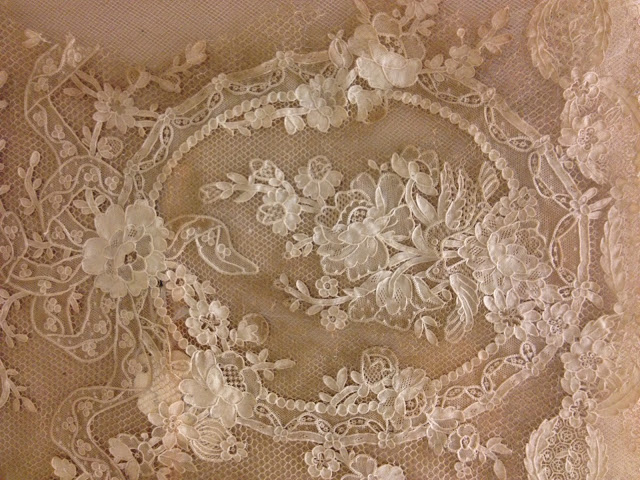 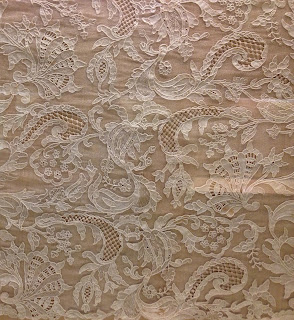 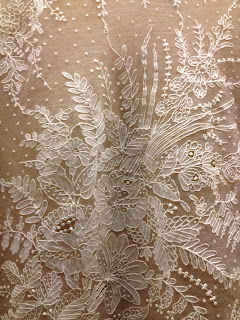 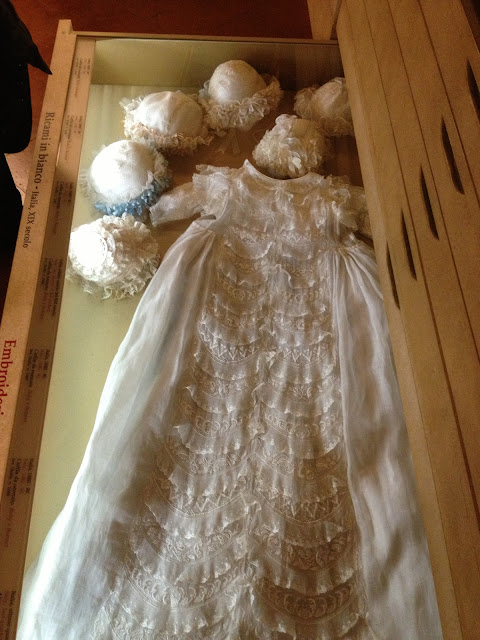 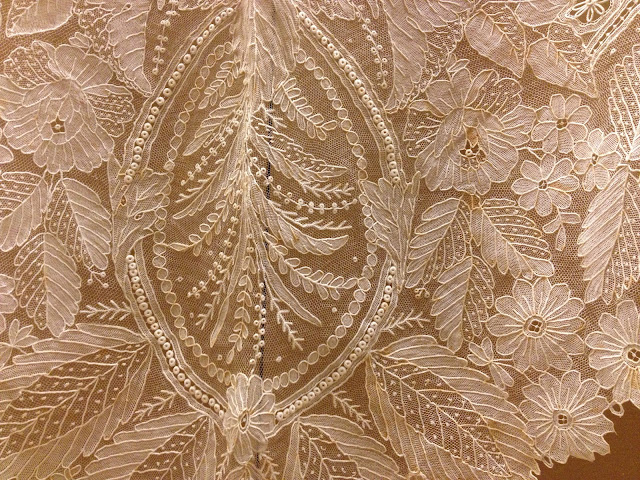 Posted by NewTuscanExperience at 11:13 AM No comments: