I have to be honest, one of the things I have NOT grown accustomed to in is the bread. For those who have never been here, it might be a surprise to learn that Tuscan bread has no salt. Referred to as pane 'sciocco' (the term in Tuscan dialect for saltless, but which in modern Italian means “stupid”) this characteristic distinguishes it from almost all the other breads in (and maybe in the world, except for ). Personally, I don’t enjoy saltless bread – but be warned, never tell a Tuscan you don’t think their bread is good! They get very defensive, and make you feel like you don’t have a clue about the subject. 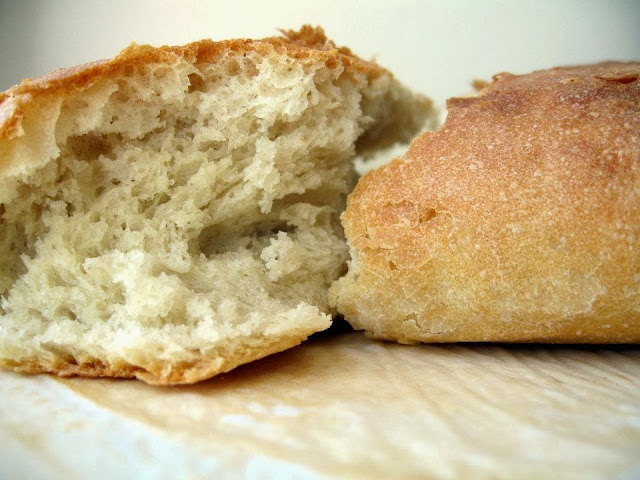 Since I have been drawn into this debate before, I will explain the reasons they give to justify the lack of salt. The first reason has historic origins. It is said that in the 12th century the great rivalry between the republics of and led to an embargo on salt by , leaving without this precious commodity. The Florentines, rather than capitulate to their enemy, opted to cook and make their bread without salt. In fact, there are even references made to this in Dante’s The Divine Comedy – where he says that 'you will taste the salt in your enemy’s bread.' Another explanation is that there was a heavy tax on salt in during the Middle Ages, so as a result, the population made do without it for the most common foods, like bread.

The second reason you hear has to do with the traditional Tuscan cuisine. Most of the region’s famous dishes are actually quite salty – so having a salt-free bread to accompany them is a better choice. When the hearty vegetable soup called Ribollita is made, the bread without salt helps to temper the savory flavor of the broth. Even Tuscan prosciutto is much saltier than its counterpart from .

Still today, Tuscans will defend their bread – and claim it is better than most others, not only for its taste but for its texture and longevity (as it tends to stay fresh longer if carefully preserved).  In addition, the ancient custom of never throwing away stale bread remains, and there is a dish for every season to reclaim leftover loaves. From Panzanella in the summer to Pappa al Pomodoro in the winter and Bruschetta and Crostini all year round, you’ll be sure to find a way to use your old (saltless) Tuscan bread.
Posted by NewTuscanExperience at 1:08 AM No comments:

The Shattered Myth of the Carefree Italians 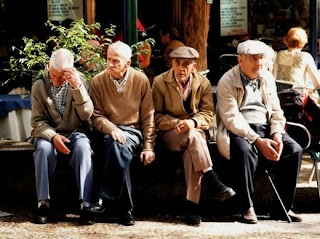 Surprisingly, Italians were found to be among the unhappiest people in according to a recent survey conducted by the UN Sustainable Development Solutions Network and the Earth Institute of Columbia University. Despite its great climate, excellent food, and extraordinary natural setting, doesn’t seem to make its natives happy (anymore). Those who ranked at the top of the list were , in first place, followed by , , The Netherlands and . In Europe, is only ahead of , and .

As someone who lives in Italy, I don't think it requires a rocket scientist to understand what’s behind the current “depression” of Italian citizens. It’s enough to look at the statistics: the happiest European nations are the ones whose governments and economic situations are much more stable and florid than those of the Bel Paese. After years of “going with the flow” and placidly accepting the shortcomings typically associated with their country, Italians are beginning to tire of this “make the best of it” attitude they have been forced to adopt for so long.

The past ten years have created major upheavals in the precarious equilibrium of the Italian lifestyle. Membership in the EU has meant that there are new rules and standards which must be respected, and as a result, much of the art of getting by for which the Italians are so famous has been lost. This is not to say that Italians are intrinsically corrupt, it is merely to point out that when you live in a country where the rules exist, but they are rarely enforced (and those who make them are the first to ignore them) you tend to get lax yourself. It’s true, there is a tremendous problem with tax evasion, but over the years, rather than finding and fining the culprits, the government simply continued raising taxes and adding new ones to try and make up the difference. As a result, those who are honest find themselves paying among the highest taxes in the Western world! Yet, unlike their Scandinavian counterparts who are also heavily taxed, the Italians have very little benefit from their “investment”.

In northern social services and public administration function like clockwork, hence the population has many advantages in return for their tax contribution, which in turn produces "happiness". In , this is not the case. Bureaucracy has always been, and continues to be, an outright nightmare. Local governments are broke, and as a consequence they are constantly cutting back on services. Politicians across the board have lost respect among the population, as they have proven themselves unworthy of their office -  many are corrupt and most have been unable to provide any ongoing stability or effective governance for years. 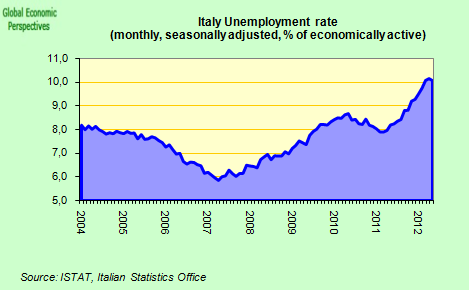 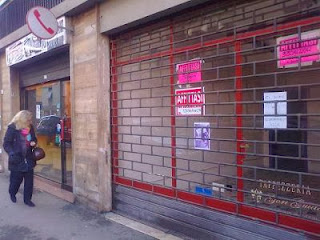 Today, with unemployment at a record high and the worst economic recession in decades it would be very odd to find the majority of Italians defining themselves as “happy” in a survey which includes factors like job security, political stability and corruption. The figures are staggering: presently almost 5 million Italians are living in poverty, more than double since 2008. During the first 6 months of 2013 there were 21,000 businesses that folded; construction and real estate are on their knees; industry and the auto market are plummeting. However, the greatest risk for the country would be if people lose hope that things will improve. Bolstering public optimism by providing concrete solutions to the current situation is where politicians and statesmen must focus their efforts. 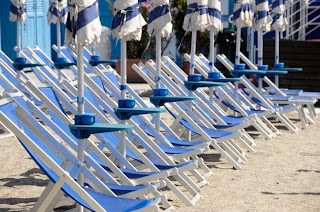 So, while there is probably no Italian who will deny that they live in one of the most beautiful countries in the world, many will confirm that it is not an easy time to live here. It’s obviously not enough to have wonderful restaurants in your country if you can’t afford to eat in them. The extraordinary scenery and plentiful sunshine are great, but people want to be able to vacation and enjoy the seaside, countryside and art cities. When you begin to take all the fun out of life, anyone would feel unhappy – especially those as jovial as the Italians.
Posted by NewTuscanExperience at 6:46 AM No comments:

Although the 2013 World Cycling Championships in were a success in terms of attendance (in fact finding a hotel in with availability during that week was nearly impossible) it seems that from a commercial point of view the results were rather disappointing. The figures just out reveal that sales went DOWN by up to 50%! 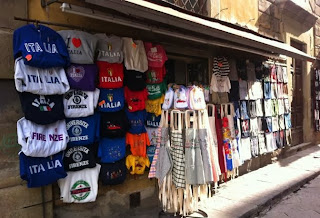 This means that all the additional people who came for the race didn't buy much, and since the locals were (for the most part) kept out of the participating cities due to traffic closures, stores suffered losses. Unfortunately, this outcome is a sign of our times. Here in they have coined a term for it: “turismo mordi e fuggi” (literally, bite and run). In general, tourists are staying fewer days and spending less and less during their visits - both in terms of shopping and services. Travelling on a shoestring is on the rise and those merchants who have invented strategies to combat the new phenomenon are doing better than the others. Just take a look around at all the panini venues, selling cheap, quick alternatives to a sit down lunch, or those shops and stands filled with trivial gadgets (NOT Made in Italy and often counterfeit) that are cropping up like mushrooms.

The widespread instability of the global economy is forcing commerce to change worldwide, but the result is rather depressing. Everyday there are fewer places where you can find good quality, reasonably priced products. The high-end goods (for which in particular is famous) are becoming totally out of reach for the middle class customer. Today, buying a well-known designer brand is no longer an option for many who just a few years ago could afford to “splurge”, even if only once in a while, on some of these products. Yet, for the most part, the alternative is to have to purchase things that are of significantly inferior quality – and still feel like you are probably over-paying for what you are getting. So, what’s the result? Buy less, spend less, and wait for better times (or sales!)

As we cut out the superfluous from our spending, those who work in the retail sector are feeling the brunt of it. Many people don’t want to eliminate travel from their lives, so they trim the excess in order to make it work. Rather than an expensive souvenir, they buy a small keepsake. That beautiful leather handbag they see in a shop window remains in its place, since in the end, “We can probably find the same thing for less, on sale, back home.”  - after all, we are globalized now. And thus, a growing number of tourists is simply leaving their footprint as they “pass through”. 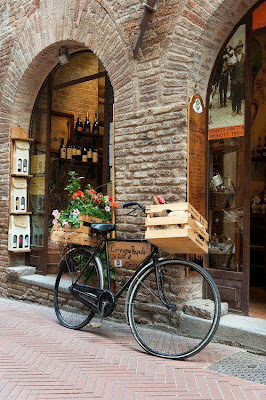 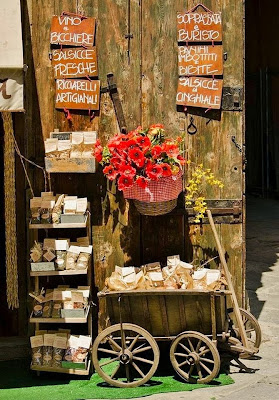 What solutions are available? Trying to defend Italian crafts and artisan production is one. There are still things here (even inexpensive ones) that cannot be found online or at the local mall back home. Italian officials should try to limit the sale of cheap (and fake) imported products that have nothing to do with or its traditions which are beginning to flood the market. Merchants need to work harder to offer good quality at fair prices – no matter what they sell. Tourists should also be enlightened about the consequences of their “just passing through” behavior – because one of the main reasons that draws them to is the old world charm of this beautiful country. Unless they too help us to defend it, we all risk losing a huge piece of the nation’s fabric – and that would really be a great shame. 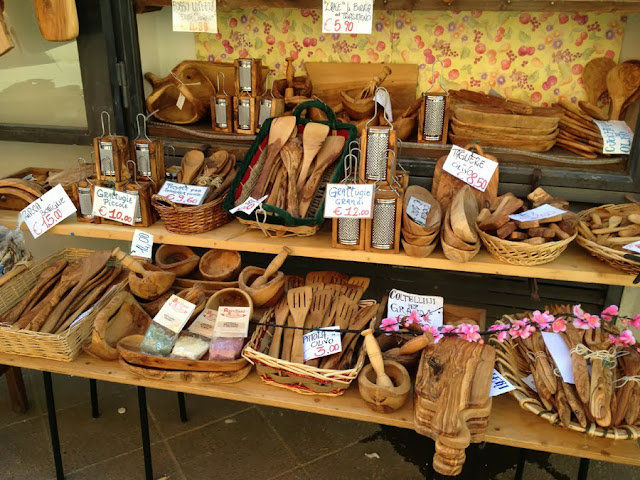