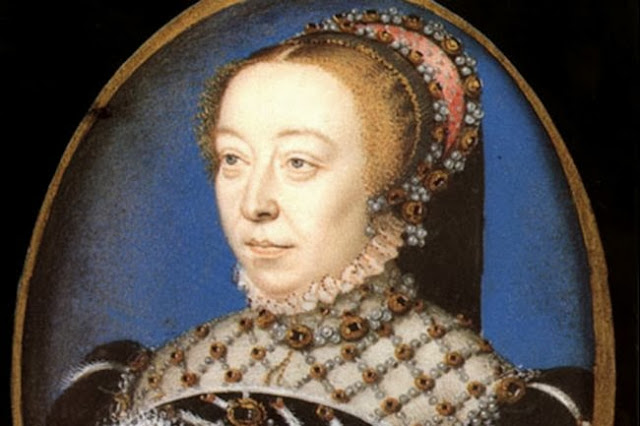 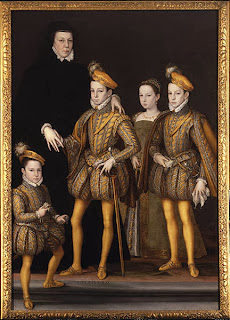 Catherine was the daughter of Lorenzo de’Medici.
Born in on April 13, 1519, at the age of only 14, her uncle, Pope Clement VII,  sent her to to marry the Duke of Orléans. Her destiny was to become the Queen of France in 1547.

When her husband, Henry II, died in a jousting accident in 1559, Catherine was thrust onto the political stage as she fought to defend the rights to the throne of her sons: first Francis (who died only one year after his coronation), then 10-year-old Charles, for whom she acted as regent throughout his 14-year reign, and finally Henry. 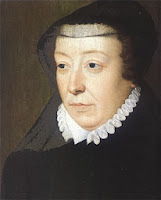 The ongoing struggle in between Catholics and Protestants led to civil war in 1562. Catherine’s efforts to bring reconciliation included marrying her daughter Marguerite to the Protestant Henry, King of Navarre. However, their wedding day became known as the St. Bartholomew’s Day Massacre when the leader of the Protestant Huguenots was murdered together with hundreds of other Protestants gathered for the celebration. Catherine’s hand in this violent event was suspected, casting a shadow over her public image. For many she became the Black Queen. In fact, her portraits depict a cold and heartless woman dressed in black (despite the custom that royals wore white for mourning). She was compared to Lucrezia Borgia and Machiavelli, for her cunning and conniving, but was also recognized by some historians as the most powerful woman in 16th century .


Recent historical analysis has cited some injustice regarding this harsh evaluation of the Florentine Queen, concluding that her influence in was not completely negative. She was also responsible for the cultural enrichment of the nation through her patronage of the arts and her efforts to refine the manners at court by introducing the use of the fork and serving savory and sweet foods separately. She also brought with her the Tuscan cuisine, including besciamella (béchamel) – which was to become a staple in French cooking. And last, but certainly not least, it is said that she taught the French to wear underwear, something which had been unknown to them before…
Posted by NewTuscanExperience at 1:44 AM No comments: